Several studies have reported that sleep bruxism rarely occurs in isolation. In a research study of sleep bruxism and risk factors in the general population, it was found that among the associated sleep symptoms and disorders that obstructive sleep apnea (OSA) was the highest risk factor for bruxism ( teeth grinding). During the sleep apnea treatment, most breathing abnormalities were eliminated and a complete stoppage of the tooth grinding was observed. The results of the research study suggest that when sleep bruxism is related to apnea / hypopneas, the successful treatment of OSA may eliminate bruxism during sleep.

Do you wake with a sore jaw or headache? Has your bedpartner told you that you grind your teeth at night? Are your teeth worn down, loose, chipped, or even broken? If so, you might have bruxism and Drs. Nugent and Ficken can help.

It is conservatively estimated that 40 million Americans grind their teeth, and five to ten percent of teeth grinders have symptoms severe enough to cause noteworthy damage to their teeth or dental restorations.

Sleep bruxism is considered a sleep-related movement disorder. People who clench or grind their teeth (brux) during sleep are more likely to have other sleep disorders, such as snoring and pauses in breathing (sleep apnea).

As of yet, doctors are unsure of the exact causes of bruxism although there is evidence that it is linked to sleep related arousals in which the cardiac and respiratory systems show a rise in activity. These arousals can take place up to 15 times an hour during sleep. Arousals during sleep are often accompanied by increased muscle activity such as in the jaw, which can be a source of teeth grinding.

These arousals are also typical in people who have other sleep related breathing disorders such as sleep apnea and snoring. Bruxism is often found in patients suffering from sleep apnea possibly as an unconscious response to the collapsed airways by tightening the jaw muscles to prevent restrictions of airflow.

Other sleep disorders have been found to be associated with bruxism including parasomnias such as: sleep paralysis, sleep talking (somniloquy), and REM sleep behavior disorder.

Stress can also be a side effect of mental disorders, stress, anxiety, and other intense emotions. It’s estimated that “nearly 70% of bruxism cases are the result of stress or anxiety.” [source]

Bruxism is found more often in people with certain personality types that are aggressive, competitive, or hyperactive.

It is sometimes found to be a coping strategy for stress or anxiety similar to lip biting, cheek biting, tooth tapping, and object biting/chewing

In children it has sometimes been found as a response to pain from earaches or teething.

Some physical conditions can lead to bruxism such as stomach acid reflux in the esophagus, an abnormal alignment of the upper and lower teeth (malocclusion).

Risk factors for bruxism can also come from side effects to taking certain psychoactive substances such as tobacco, alcohol, caffeine, and psychiatric medications for anxiety and depression. These substances often increase the likelihood of increased arousal during sleep.

Mild cases of bruxism may not require treatment but moderate to severe symptoms can cause long-term problems such as jaw pain, headaches, and teeth damage. If your symptoms include pain, discomfort, disturbed sleep (for you or your bedpartner), or damage to teeth you may want to contact your dentist or a sleep specialist for a consultation.

Have a sleep study

Like many other disorders, treating bruxism is often about finding the root cause of the disorder. If a sleep disorder is believed to be the root of the problem, scheduling a consultation with a sleep specialist may help diagnose (or rule out) a sleep disorder. Treatments for obstructive sleep apnea have been shown to dramatically reduce the prevalence of bruxism.

If your teeth grinding is caused by stress, anxiety, or mood disorders, treating those afflictions can relieve your symptoms of bruxism.

Stress management and relaxation techniques can help relieve possible intense emotions that cause you to clench or grind your teeth as a response.

Behavior therapy such as practicing proper jaw and mouth positions can help to condition you to stop grinding your teeth.

Medications such as muscle relaxants taken before sleep can help reduce the likelihood of jaw muscle tension.

Speak with your Dentist

While last on this list, speaking with your dentist is probably the first step you should take if you discover that you grind you teeth at night. During routine exams your dentist will look for wear or other signs of teeth grinding. If you do not regularly see a dentist you should schedule an appointment immediately as the damage can be permanent or costly to fix. Your dentist will ask you about your health, habits, and other factors, which may reveal the source of your bruxism.

Your dentist will also likely recommend a dental appliance to either prevent you from grinding your teeth or at least prevent damage to them.

Splints and mouthguards are usually the most recommended form of controlling bruxism. It should be noted that splints are not a cure for bruxism, but merely a form of protection for your teeth. Worn at night, a splint keeps the teeth separated and prevents damage caused by grinding as well as eliminating the sounds that may disturb your bedpartner.

Mandibular Advancement Devices (MADs) are similar to a mouthguard in that they are worn orally. However, instead of preventing your teeth from coming together, they push your lower jaw down slightly and pull your tongue forward. MADs are a common dental treatment for obstructive sleep apnea as keeping the tongue in a forward position prevents it from collapsing back into the airways. MADs have also been shown to be effective in treating bruxism both with and without comorbidity of obstructive sleep apnea. 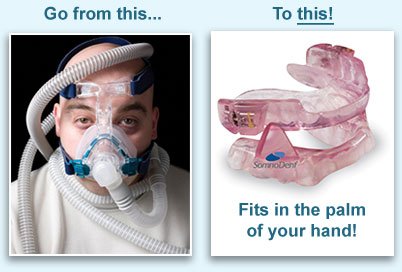