Assessment of subjects for possible Obstructive sleep apnea (OSA) requires a thorough clinical evaluation to determine the possibility of the condition as well as sleep test to determine the presence of sleep-disordered breathing. Recognition of the symptoms and signs of OSA, appropriate investigations, and when needed, referral are key steps toward the diagnosis of this disorder and differentiation from benign snorers.

Obstructive sleep apnea syndrome is highly rampant condition characterized by repetitive complete or partial airway obstruction, sleep fragmentation and oxygen desaturation. Plus, there is a collection of symptoms such as snoring, witnessed apneas, and excessive daytime sleepiness that go along with OSA. Despite it prevalence, awareness of the OSA remains low in the world, and the majority of sufferers of OSA are as yet undiagnosed. Doctors should have a high of suspicion for OSA especially among those patients at increased risk of the condition. These risk factors include:

Diagnosis of OSA is only made with a sleep test. However, examination based on history and physical examination findings should be cared out by doctors and dentists.

Snoring is the trademark presenting symptom, occurring in an overwhelming majority (up to 95%) of patients with OSA. Patients are often oblivious of their snoring sounds unless they have been told by their sleep partner or family members. When snoring becomes disruptive and loud, it can result in significant relationship and social tension. Overall, snoring has a prevalence of up to 60% in middle-aged men and 50% in middle-aged women. Thus, snoring is significantly higher than the population prevalence of OSA syndrome. The absence of snoring makes OSA unlikely but does not exclude it. The occurrence of snoring alone is a poor predictor of OSA because of it high prevalence in the community. A sleep physician must look for other supporting clinical features.

Daytime sleepiness in patients with OSA is related to sleep fragmentation caused by microarousals. The patient is repeatedly aroused from sleep in order to clear the airway in order to take in oxygen. Excessive daytime sleepiness (EDS) is an extremely subjective symptom and is frequently underreported by patients. The high frequency of sleepiness reported in the general population (20% to 30%) makes EDS a poor predictor of OSA. Furthermore, a correlation between daytime sleepiness and OSA severity is often not demonstrated. Thus, it is important to discriminate between sleepiness and symptoms such as lethargy or tiredness.

The existence of witnessed apneas is a very specific symptom of OSA. Observing breathing pauses is a concerning symptom, even if obtaining a reliable history of this symptom is difficult during. Patients are almost always unaware of this symptom. However, sometimes patients report awakening during episodes of nighttime choking. Witnessed apnea tend to be less commonly reported among females.

The association between obesity or increased body mass index (BMI) and OSA is well established. BMI is calculated by weight divided by height squared. In a sleep clinic population, 28% of patients had a BMI greater than 30kg.m2, and 47% had a BMI between 26 and 30 kg/m2. Specifically, distribution of fat around the neck and waist, know as central obesity, is particularly important. Both neck and abdominal circumference are strong predictors for OSA. The metrics of obesity generally have a linear association with the likelihood and severity of OSA, yet there is no single threshold value of neck or abdominal circumference above which OSA occurs. 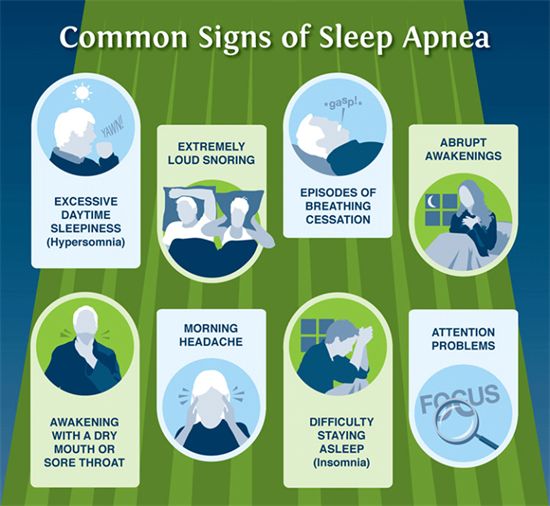 Symptoms and signs of OSA

Craniofacial factors can influence individuals to become more likely to have a compromised airway space and OSA. Mandibular retrusion, maxillary deficiency, and nasal/sinus are the largest anatomical factors for OSA.

History of hypertension, cardiovascular disease, strokes, diabetes, and thyroid disease should be elicited during the clinical history, and these conditions should be looked for during the physical examination because some of them could be important aggravating factors for or consequences of OSA. 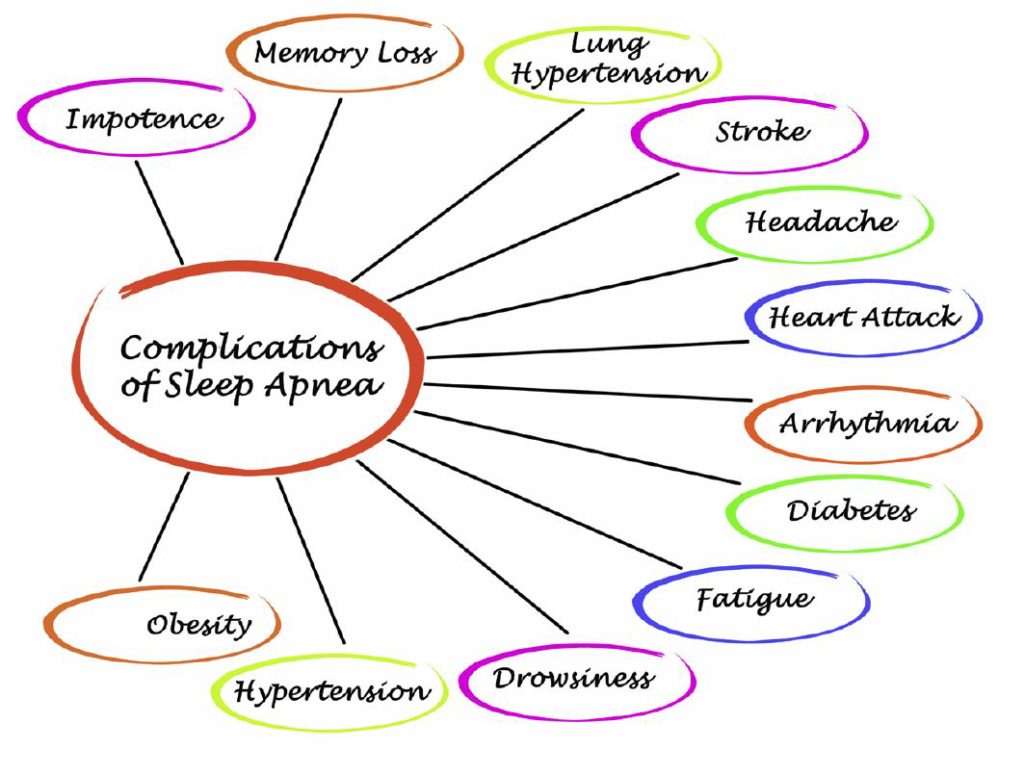 Back to More OSA Information