The classic patient with obstructive sleep apnea (OSA) is obese and has daytime sleepiness. Closer examination usually reveals a multitude of abnormalities that indicate compromised cardiometabolic disorders include hypertension, diabetes, and high cholesterol. Plus, these patients are prone to neurobehavioral deficits include excessive daytime sleepiness, altered mood states, and problems with memory consolidation. It is important to note that while the obese OSA patient is the classic example, patients do not have to be obese to suffer from OSA.

Significant evidence from cross-sectional and longitudinal studies (both clinic and community based) suggests that OSA plays a causative role in aggravating cardiometabolic and neurobehavioral function. There is also increasing evidence that treatment of OSA improves both, further suggesting OSA is a causative factor. Population studies also illustrate that treatment of OSA is associated with reductions in morbidity and mortality.

A number of cross-sectional and longitudinal studies have shown a strong association between OSA and the development of coronary artery disease and stroke.

In a ten year Spanish cohort study found a moderately greater risk of fatal and nonfatal cardiovascular events in patients with untreated severe OSA (mean apnea-hypopnea index [AHI] of 43 events per hour) than in a healthy population without OSA. In contrast, patients with severe OSA who accepted CPAP treatment had significantly reduced numbers of such events, comparable to the numbers experienced by healthy subjects. The was the first large cohort study to report that OSA increases cardiovascular risk for morbidity and mortality.  – Marin JM, Carrizo SJ, Vicente E, Agusti AG. Long-term cardiovascular outcomes in men with obstructive sleep apnoeahypopnoea with or without treatment with continuous positive airway pressure: An observational study. Lancet 2005;365:1046-1053

A cohort study from the United States examined the association between OSA at baseline and strokes and death after a mean of 3.4 years. Although this study did not involve any intervention for OSA, the results suggested that OSA was associated with the risk or stroke or death from any cause, independent of other risk factors, including hypertension. – Yaggi HK, Concato J, Kernan WN, Lichtman JH, Brass LM, Mohsenin V. Obstructive sleep apnea as a risk factor for stroke and death. N Engl J Med 2005;353:2034-2041

Along from the aforementioned clinic-based studies, there have also been two recently reported community-based cohort studies from Australia and the United States that further support a causative role for OSA in morbidity and mortality.

The Australian Busselton cohort study demonstrated a moderately increased risk of all-cause mortality after 14 years in subjects identified to have moderate-to-severe OSA by a portable sleep apnea monitor worn at home. This equated to 33% morality rate associated with moderate-to-severe OSA compared to 7.7% and 6.5% mortality rates for mild or no OSA, respectively. – Marshall NS, Wong KKH, Liy PY, Cullen S, Knuiman MK, Grunstein RR. Sleep apnea as an independent risk factor for all cause mortality: The Busselton Health Study. Sleep 2008;31:1079-1085

To go along with the Australian findings, a Wisconsin study revealed that, over a mean follow-up of 13.8 years, subjects with sever OSA (AHI greater than 30) at baseline had a greater risk of all-cause and cardiovascular mortality (adjusted hazard ratios of 3.8 and 5.2, respectively) than did subjects without OSA (AHI less than 5). These findings represent the first community-based evidence that OSA is a predisposing risk factors for all-cause and cardiovascular risk factors. However, it is still unclear if mild OSA conveys a significant cardiovascular risk. – Young T, Finn L, Peppard P, et al. Sleep-disordered -breathing and mortality: Eighteen-year follow-up of the Wisconsin Sleep Cohort, Sleep 2008:31:1071-1078

The increased morbidity and morality in patients with OSA is likely to involve several common pathways, including glucose intolerance, hypertension, and dyslipidemia-features that, when grouped with central obesity, define Metabolic Syndrome.

Metabolic syndrome is a cluster of conditions — increased blood pressure, high blood sugar, excess body fat around the waist, and abnormal cholesterol or triglyceride levels — that occur together, increasing your risk of heart disease, stroke and diabetes. 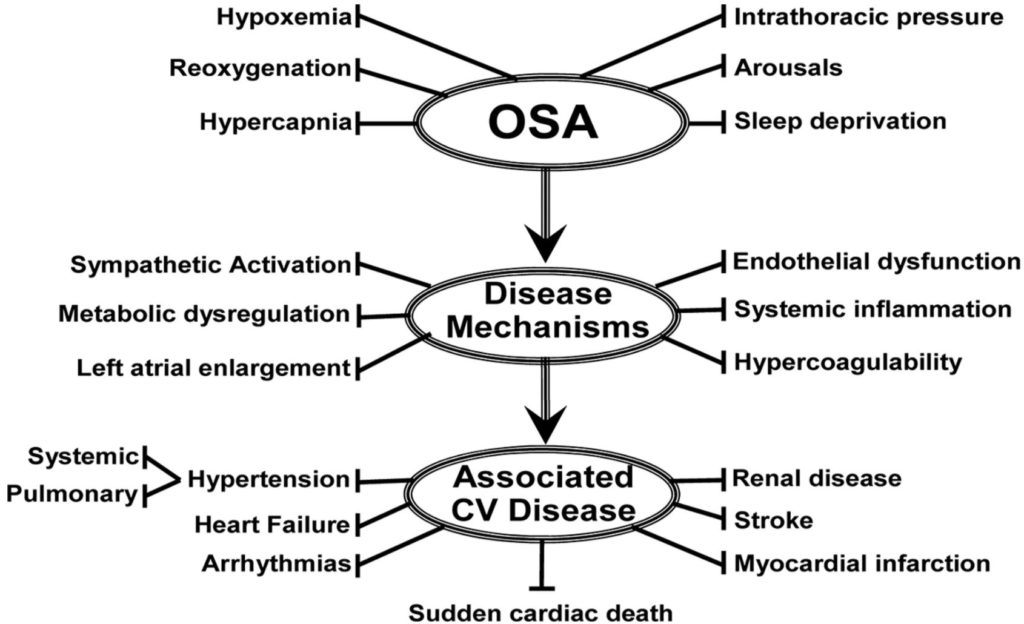 Data suggest an independent association between OSA and features of metabolic syndrome and it overall prevalence. OSA may also ultimately contribute to the development of type 2 diabetes.

Of all the metabolic syndrome conditions OSA has been most strongly linked with hypertension. Studies suggest that the association is dose dependent. Also, several randomized controlled trails have shown that treatment of OSA with either CPAP  or mandibular repositioning appliances cause blood pressure to fall. – Bazzano LA, Khan Z, Reynolds K, He J. Effects of nocturnal nasal continuous positive airway pressure on blood pressure in obstructive sleep apnea. Hypertension 2007;50:417-423

The impact of OSA on the brain is believed to be due to a combination of sleep fragmentation and intermittent hypoxia from the repetitive respiratory events in sleep. Studies examining the pattern of cognitive dysfunction show variable results.

Cognitive dysfunction (also known as brain fog) is the loss of intellectual functions such as thinking, remembering, and reasoning of sufficient severity to interfere with daily functioning. Patients with cognitive dysfunction have trouble with basic arithmetic, verbal recall, and concentration.

Cognitive deficits are thought to arise from the sensitivity of the brain’s prefrontal cortex to the effects of sleep loss.

Studies show that treatment of OSA reduces sleepiness, however, some studies propose that recovery of cognitive impairment is incomplete after CPAP treatment for OSA. This could relate to irreversible long-term effects of untreated OSA or to other comorbidities.

This phenomenon of incomplete recovery may be due to suboptimal treatment of OSA, but it is also possible that it may arise from permanent injury to the brain secondary to the chronic intermittent hypoxia.

The brain effects of OSA may also have possible long-term consequences in children. UP to 5% of school-age children meet the criteria for OSA, and the condition has been connected to increased behavioral problems and impaired academic performance. – Beebe DW. Neurobehavioral morbidity associated with disordered breathing during sleep in children: A comprehensive review. Sleep 2006;29:1115-1134

Back to More OSA Information