Why is Snoring a symptom?

The pathology behind snoring and obstructive sleep apnea is the same: a narrow, collapsible airway

Snoring noise is caused by the passing air through a small hole, the tissues vibrate making the snoring sound.

Someone who “just snores”, who gains a few pounds or has a few alcoholic drinks could develop into someone with apnea. 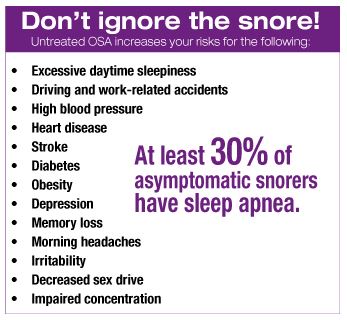 Snoring and OSA correlation: Snoring is the most common symptom of OSA occurring in 70% to 95% of patients. (National Institute of Health 2010)

Desaturation is a drop in oxygen saturation. A desaturation of 4% or greater sleep would be considered a hypopnea event.

Oxygen saturation is a major component of OSA

Why is excessive sleepiness a symptom?

Frequently when your body pulls you out of an apneic event it is accompanies by a mico-arousal. This is where you are aroused but don’t necessarily wake you up from sleep, but the micro-arousal pulls you out of whatever sleep stage you were in.

The result of micro-arousals is a disrupted sleep pattern and insufficient amounts of sleep.

People do not feel rested in the morning because they spent the night fighting to breath.

A research study on sleep apnea sponsored by the Federal Motor Carrier Safety Administration and the American Transportation Research Institute of the American Trucking Associations found that 28.1% of those studied, holding a CDL, had some form of sleep apnea. 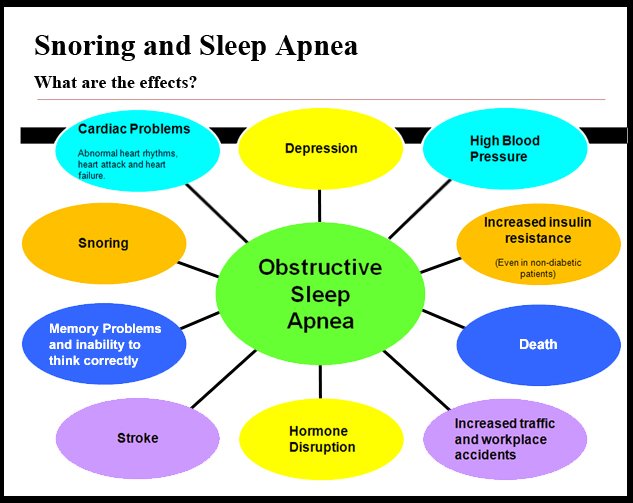 Your Total Score is:
0

Risk levels based on scores of screening test:

Between 8-11: you are at moderate risk

16 or higher: means you are at severe risk

Your score places you at LOW risk. Dr. Nugent recommends that you proceed with formal testing and follow up care with medical professionals. Without formal testing, it is impossible to know exactly what your risk level is.

Your score places you at MODERATE risk. This can be serious and Dr. Nugent highly recommends that you proceed with formal testing and follow up care with medical professionals.

Your score places you at HIGH risk. This is serious and Dr. Nugent highly recommends that you proceed with formal testing and follow up care with medical professionals.

Your score places you at SEVERE risk. This is serious and Dr. Nugent highly recommends that you proceed with formal testing and follow up care with medical professionals.