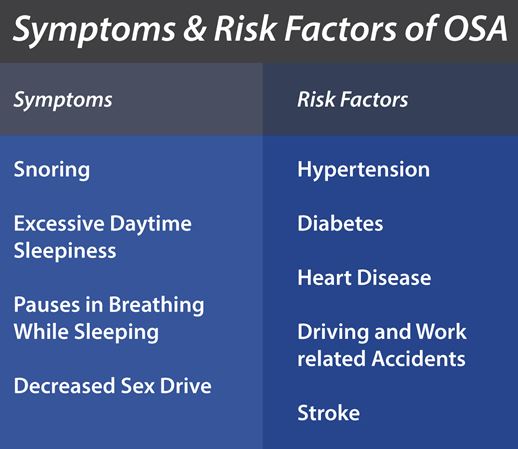 OSA when left untreated can lead to hypertension (high blood pressure), congestive heart failure, atrial fibrillation, stroke, and other cardiovascular problems. Furthermore, it is associated with Type 2 diabetes and depression. Also, Obstructive Sleep Apnea is a factor in many traffic accidents and accidents with heavy machinery, owing to the constant daytime drowsiness suffered by many OSA patients before the disease is documented and treated.

Obstructive Sleep Apnea occurs when the soft tissue in the back of the throat repeatedly collapses and blocks the airway during sleep. These partial reductions and complete pauses in breathing typically last between ten to thirty seconds but can last for one minute or longer. These pauses can happen hundreds of times a night, leading to abrupt decreases in oxygen levels. The brain alerts the body to its lack of oxygen, causing a brief arousal from sleep that restores normal breathing. The result is a fragmented quality of sleep that often leads to excessive daytime sleepiness (ESS). Patients with OSA may snore loudly and frequently, with periods of silence when airflow is reduced or blocked. Then they make snorting, choking, or gasping sounds when their airway reopens. This cycle and happen hundreds of times a night. The patient never gets sustained deep sleep and they wake up in the morning feeling unrefreshed.

In addition to snoring and excessive daytime sleepiness, sleep apnea can cause memory loss, morning headaches, irritability, depression, decreased sex drive and impaired concentration. Sleep apnea patients have a much higher risk of stroke and heart problems, such as heart attack, congestive heart failure and hypertension. Lastly, OSA patients are also more likely to be involved in an accident at the workplace or while driving.

The following quiz was developed by the American Academy of Sleep Medicine. It can provide clues as to how healthy and effective your sleep is.

If you answer true to any of the following you may want to call for a free consultation appointment.